The R-Value of Wood 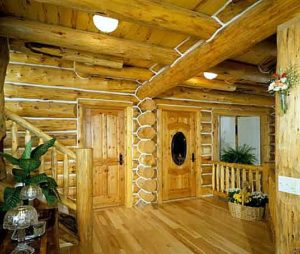 The R-value for wood ranges between 1.41 per inch (2.54 cm) for most softwoods and 0.71 for most hardwoods. Ignoring the benefits of the thermal mass, a 6-inch (15.24 cm) thick log wall would have a clear-wall (a wall without windows or doors) R-value of just over 8.

Compared to a conventional wood stud wall [3½ inches (8.89 cm) insulation, sheathing, wallboard, a total of about R-14] the log wall is apparently a far inferior insulation system. Based only on this, log walls do not satisfy most building code energy standards. However, to what extent a log building interacts with its surroundings depends greatly on the climate. Because of the log’s heat storage capability, its large mass may cause the walls to behave considerably better in some climates than in others.

Logs act like “thermal batteries” and can, under the right circumstances, store heat during the day and gradually release it at night. This generally increases the apparent R-value of a log by 0.1 per inch of thickness in mild, sunny climates that have a substantial temperature swing from day to night. Such climates generally exist in the Earth’s temperate zones between the 15th and 40th parallels.

Return to the Homepage